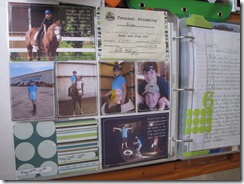 As all the school year sports and the school year itself wrapped themselves up, there didn’t seem to be a whole lot going on these two weeks. Either that, or I was just busy and didn’t really document the daily stuff. Either way it’s just fine, and I was perfectly content combining two week on one page and calling it done.

I included Bryce’s heat time card from the last day of swimming. He’s looking forward to starting again in the fall. It will be interesting to see what his times look like after the first session. It’s funny that the two major events of the whole time span, actually both happened on the Saturdays: Summer’s first horse show (5/28), and our first neighborhood block party (5/21). 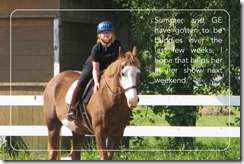 Summer ended up riding this horse, GE, in her very first horse show. She did so well, and we are incredibly proud of her. She ended up getting both a 3rd place ribbon, as well as a 5th place ribbon. She wasn’t particularly thrilled that she had to ride GE in the show. He is such a sweet horse, and we’re thankful he survived his lip cancer. However, because he has to wear a special bridle with no bit, it’s a tad more difficult to steer him. But she did just fine. The consensus is that because he’s a special horse, he needed a special rider, and she certainly fits the bill there! 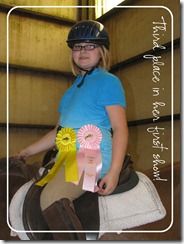 The block party was a huge success. Every one of our neighbors participated and we even had neighbors and friends from the adjoining areas. Since we had a DJ the atmosphere was fun all night, particularly during the group dances.

The kids had a riot and some of the adults acted like the kids! The boys even set up all the skateboarding stuff and they were busy doing tricks in the street with the lights highlighting their tricks. As you can see by the photo, Bryce certainly felt like the King of the World! 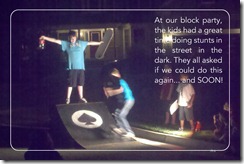 Popular vote says this is an event that is definitely worth repeating. I was happy our plans worked out as this was the first time that I had planned a block party. I’m happy to report that I’m in the preliminary stages of planning our next block party to bid summertime adieu.