This is me, right now, Tuesday, April 17th, 2012. Take a minute and try it you might surprise yourself. Leave a note for me in the comments., I can’t wait to see what you come up with!

I was… thin and healthy once at the same time, really

I think … I should write more

I wonder … if Earth is the only place ‘beings’ live

I save … snippets from our every day stuff {and now I have a place to put it thanks to Project Life / @ Becky Higgins!}

I can’t imagine … what my life would be like if I hadn’t met my husband right before I graduated college.

I promise … to keep scrapbooking

Posted by GadgetGirl at 12:28 PM No comments:

Email ThisBlogThis!Share to TwitterShare to FacebookShare to Pinterest
Labels: health, life is good, me

Our new doctor has answers!

Here is the latest update on Summer. I'm pretty tired right now, so please excuse the run-ons and general disorganization of this post.

So we finally found a doctor that actually knows what she is talking about and is actually interested in finding the CAUSE of all these headaches rather than just trying to quiet them with drugs. She is a pediatric MD who also practices homeopathy. She is absolutely brilliant and was recommended to me by two of my friends. She spent THREE HOURS with us on our initial visit asking lots and lots of questions as well as going over all of the test results I brought in from the hospital. We also went over the timeline of symptoms I put together and came up with a plan.

There are several things right off the bat that she is trying to correct. First of all, Summer's immune system is extremely compromised. She has recommended a gluten free/dairy free diet to clean out 'her gut' and probiotics to put the good stuff back in. She has Summer taking several homeopathic remedies to clear the redness and inflammation both on the outside (rosy cheeks) and the inside (inflammation causing headaches) and is looking forward to being able to eventually take her off the ridiculous dosage of daily preventative medication she is currently taking. Additionally, she strongly suspects that, although Summer took antibiotics for Strep Throat at the onset of this craziness, she never actually got rid of it and now has something called PANDAS ( Pediatric AutoImmune Neurological Disorder Associated with Strep).

During our recent post hospitalization neurology follow up appointment, I asked what the plan was for getting her back to normal, i.e. not having to take drugs everyday. The answer was the opposite of what I expected. They increased her dosages since she was still having so much breakthrough pain. My neighbor (an adult) has migraines and is taking a smaller dosage of the same medication daily - that was not a comforting fact to find out!

Summer will be having some lab work done on Tuesday to test, among other things, for three different strep strains. Regardless of the outcome, the compromised immune system is being addressed. We will also be doing additional testing in the near future for food allergies/sensitivities. Given our family's strong history and the different sypmtoms Summer has presented with ...the doctor also believe Summer has some major food reactions going on as well. We had done skin allergy testing that came back mostly clear but she believes there are some underlying issues there as well. This doctor also feels that while Summer may have migraines, she doesn't necessarily believe that all these headaches are migraine related. Something to do with pain receptors and neuro transmitters which we've been given a homeopathic remedy for as well.

We have our fingers crossed that we will continue to get answers and Summer will start to actually heal rather than just having the drugs mask the symptoms. We are thankful that she's been relatively pain free this last week and we're hoping that trend will continue. (14 out of 51 days still isn't a great ratio in my book but we're hopeful that we're trending in the right direction.)

Here's hoping that this is finally the thing that works. Summer doesn't really care for the new eating plan but she likes her headaches even less so she's being a trooper about it. I'm hoping for some positive side effects for myself as well since I'm joining her on her gluten free/dairy free/migraine trigger free journey.

Posted by GadgetGirl at 12:25 AM No comments:

Just too much for one little body

This is now our medicine ‘corner’.

I’m so thankful that my daughter is starting to feel better and her headaches are becoming less frequent. However, the amount of medication she is currently taking in order to feel well just seems overwhelming. We are researching some other options for her as well as our son in order to find a healthier way to keep them well without all the medicines. I have a feeling our journey has just begun. We are seeing a new doctor next week that we’ve heard some great success stories about and we are hopeful she will have some really good answers for us. Stay tuned, it’s going to get interesting around here…

Posted by GadgetGirl at 11:30 AM No comments:

You know you work in the country when.... 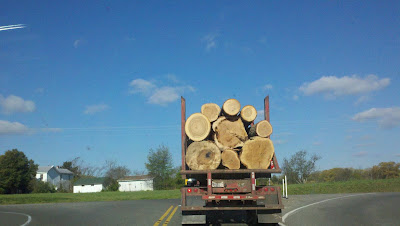 .. This is your view on your way to work!


Published with Blogger-droid v2.0.4
Posted by GadgetGirl at 9:41 AM No comments: