Welcome to my Week 6 (3/13-3/19). I hope you are keeping up with your Project Life as well, if you are indeed participating. It’s a fun challenge which I’ve found to keep me grounded in the everyday. Here is the two page spread for the week: 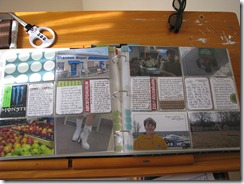 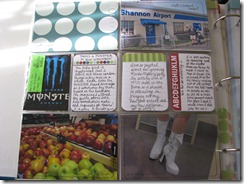 Apparently this week I had a lot to say :-)

I’m finding ways to include more tidbits from our everyday life, ephemera, memorabilia, etc. I’ve always kept that type of stuff but never ended up using it, so I’m happy it’s now found a home.

My hubby enjoys drinking MONSTER energy drinks, so I thought it was appropriate to include a piece of the box in this week’s layout. Additionally, the wristband is from a kids’ consignment sale that I finally participated in.

There’s a MONSTER in your LUNCHBOX!
The kids find it hysterical that I blurt out these random things every once in a while. Keith likes the MONSTER brand beverages so I sometimes buy them to pack in his lunchbox. One morning I uttered the quote above: both kids immediately made odd requests for their lunchboxes. Summer asked for a pony and Bryce asked for an airsoft gun!

I am so psyched about our upcoming Murder Mystery party. The setting is in a 1970’s disco in the Bronx so it should be interesting. I’m bringing out my New York accent and my new platform go-go boots :-)

D is for de-cluttering
I’ve been working on removing some of the clutter from our house to make it easier to keep it clean. I’m so proud of us for the timely weeding out of old clothes from the kids’ rooms to donate as well as sell at a local consignment event. For years I said I would & now I did. Yay for us :-)

And on to the right side: 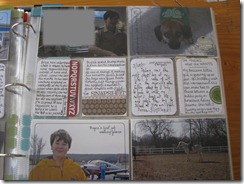 W is for Work
Bryce now understands what it means to have some responsibilities outside of home and school. Within the last few months he has been washing airplanes on weekends a the flight school where Keith works. He also recently started taking care of three dogs for our new neighbors. I’m so proud of how responsible he is being and he LOVES the $$ in his pocket.

Bryce’s scout troop made dinner for the congregation at the church. He was in charge of making his awesome garlic bread. The boys were great hosts. Nobody left hungry from the spaghetti & meatball feast complete with fried OREOS. YUM! Fried Oreos Rock. (Scouts purposely blurred)

Today was the most sleepy day of my life! I woke up at 5 in the morning after falling asleep by 11 only to have to walk my neibors (his spelling) dogs at six and catch the bus to school (at 7:00 am! Whhh soooo…tiiirrreeeed!   {Note from me: I love capturing the overwhelming feeling he had because he had to get up 30 minutes early, which was 6 not 5, I guess that’s what it felt like to him!}

She KNOWS what she WANTS
My decisive little girl is growing up so fast. Her birthday wish list was expensive this year so she had to choose between a kiddie party or horseback riding lessons. She’s had 3 lessons so far and they are the “best days ever!” according to her.

I wanted to save the vaccination tag for our dog when we got a new one. The old one shows a registration in NC which is where we adopted her from. She’s a rescue pup and so sweet, just thought the little reminder of how we saved her and she' has saved us was worthy of going into our book. I think she looks adorable in her green “Pet Me I’m Irish” shirt, don’t you?

Posted by GadgetGirl at 5:58 AM